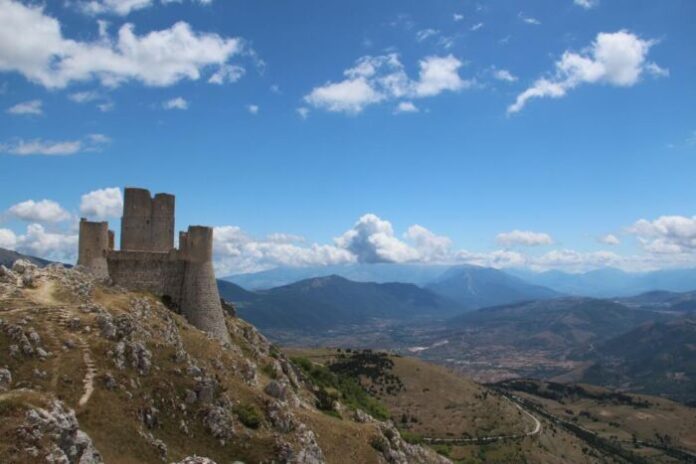 At the edge of Campo Imperatore, the vast plateau defined by the well-known mountaineer Fosco Maraini as the “Little Tibet”, there are some of the most famous fortified villages and castles in the Apennines.

The area was highly appreciated in the Middle Ages for its flourishing sheep breeding and, consequently, for the processing of wool; for this reason the Florentine Medici family had acquired these lands and these fiefdoms in 1579. Suggestive is the path that can be taken on foot from Santo Stefano di Sessanio to Rocca Calascio, a symbol of the area with its magnificent fortress.

Santo Stefano di Sessanio, a small pearl of Abruzzo, is a fortified village perched on a hill at 1251 meters; the village preserves the limestone houses and streets, offering an indefinable glimpse of medieval architecture.

The Medicean Tower, cylindrical in shape, with the coat of arms of the Florentine family, always dominated the village; due to the 2009 earthquake, however, the tower with many other buildings collapsed. In the village you can move through stairways and narrow streets through stone houses and ancient churches and to discover the house-walls that surround the town; with few windows they serve as fortification of the village.

Following the provincial road for Calascio for about a kilometer, a dirt road with white-red signs appears on the left; after a few meters along this road, you have to continue to the right along a path that climbs through a wide grassy ridge to the summit of Monte delle Croci (1458 meters), from which you can see the castle of Rocca Calascio. After descending a large saddle, you go up towards the Renaissance oratory of the Madonna dei Monti, also called the church of Santa Maria della Pietà.

The church was probably built on a pre-existing Renaissance shrine and has an octagonal external structure. The main portal, closed by a wooden door, is in Baroque style. The building is located on the site where, according to tradition, the population defeated a band of brigands who, coming from the nearby Campo Imperatore in the Papal States, were about to rage in the possessions of the Piccolomini family.

For a ridge of grass and rocks you arrive at the castle of Rocca Calascio, a suggestive fortified watchtower. After being uninhabited, in the 80s Rocca Calascio and the surrounding area were patiently recovered and today it is possible to find here, among the many ruined houses, some renovated structures, where you can stop or stay. The Rocca has undergone various consolidation works, which allow you to visit it, also enjoying an incredible view of the Abruzzo landscape.

The castle has ancient origins, when already around the year 1000 in this area there was an imposing sighting system, which reached the sea from the Apennines; the fortification allowed the control of the territory both from the defensive point of view and as regards the paths linked to transhumance. In 1463 the fortress passed to Antonio Todeschini of the Piccolomini family, who equipped the structure of the cobblestone walls and four cylindrical towers with Ghibelline battlements.

In 1703 a violent earthquake occurred which damaged the castle and almost entirely destroyed the village below, which had already suffered the destruction caused by the earthquakes of 1348-49 and 1461; only the lower part of the medieval village was rebuilt, while the rest of the population found refuge further downstream, in the current town of Calascio. In the following decades, once its strategic function ended, the fortress went into decline and was gradually abandoned until it was completely uninhabited in 1957.

The fame of Rocca Calascio is also due to the numerous films that have been shot here, thanks to the beauty of the place and the Rocca itself; the most famous is surely Lady Hawke, but the film The Name of the Rose with Sean Connery has also been set there.

In the area it is also possible to taste the many dishes of the Abruzzo tradition, thanks also to those who have been able to enhance a heritage that was in danger of being lost.

Returning to the oratory of the Madonna dei Monti, you can continue to Lake Racollo, which descends to cross a dirt road and continues on the ridge of the Cima delle Serre up to a small pass, where you reach the paved road that connects Santo Stefano di Sessanio with Campo Imperatore. Turning left for a route marked in white and red you return to the village of Santo Stefano di Sessanio, passing through the church of Madonna del Lago, a church just outside the town. Dating back to the 17th century, the small religious building stands on the banks of a small lake; the structure was damaged by the 2009 earthquake.

An itinerary suitable for an easy approach walk, which can be traveled in the months from spring to autumn; a path completely immersed in nature and surrounded by the panoramas of the spectacular peaks of Gran Sasso, Majella and Sirente.

Soon more masks than jellyfish on the Mediterranean seabed: the photos