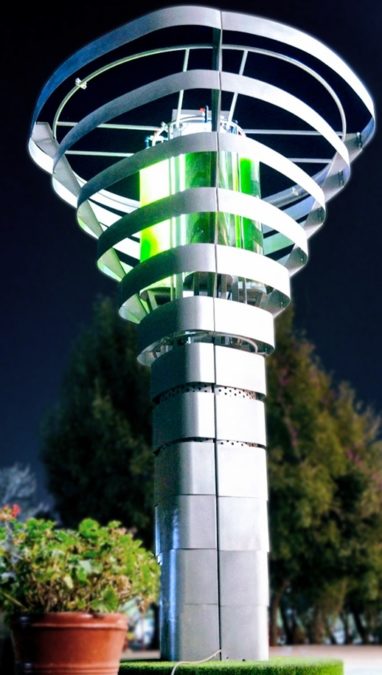 An artificial tree that absorbs carbon dioxide and returns clean air. It is not science fiction but it is what has been achieved by the Mexican start up BiomiTech, a company committed to the front line in the struggle to safeguard the planet and in the development of technologies inspired by nature.

BioUrban is inspired by nature, a device capable of reproducing chlorophyll photosynthesis to clean the air of carbon dioxide and contaminants, restoring pure oxygen to the environment. This technology, which has the shape of a giant tree, was immediately renamed artificial tree thanks to its ability to replicate the beneficial effect of trees and plants even in contexts where planting is not possible.

The structure is 4.2 meters high and almost 3 meters wide and is composed of a steel trunk that radiates increasing bands of concentric metal. Inside there are four cylinders containing microalgae, capable of carrying out the work of 368 trees.

This is what BiomiTech underlines, which specifies that the BioUrban was not born to replace trees but to integrate them in urban contexts where there is no space for planting. The air purification system reproduces the metabolism of trees, capturing the polluting compounds such as carbon monoxide, nitrogen monoxide, and particulates and transforming them into oxygen through a photosynthesis process, which returns clean air both in open spaces and indoors.

“We have always believed that to fight pollution we must act directly at the source – explains Jaime Ferrer, founding partner of BiomiTech – BioUrban is a technology designed for the urban context and intends to improve air quality for pedestrians, cyclists and transport users public, all categories that normally breathe polluted air. Ours is the first air cleaning system in the world and to achieve it we have combined biology and technology “.

The major doubts about the BioUrban are linked to the high cost of the device, around 50 thousand dollars, but the company has already planted three artificial trees: one in the city of Puebla, in central Mexico, where the startup is based, one in Colombia and one in Panama. Soon the BioUrban will also be installed in two locations in Turkey and in Mexico, in the capital and in the city of Monterrey.

Mars, new discovery: in the past the climate was similar to that of Earth