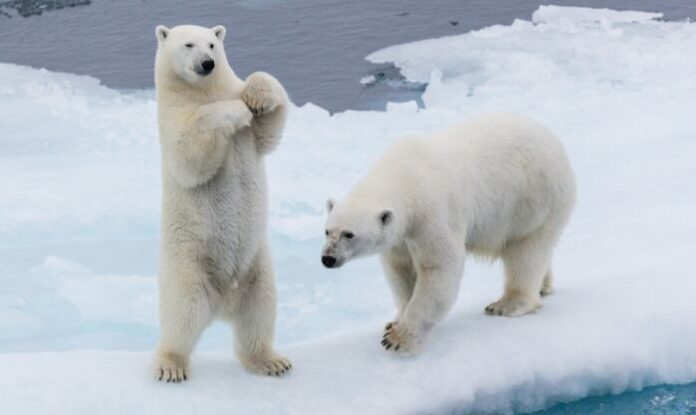 By 2050 we may have 30% less polar bears. The main cause is the climate change caused by human activities, which is making its habitat increasingly fragile. The survival of this majestic species is seriously threatened. The WWF remembers it on the occasion of the International polar bear day, which is celebrated on February 27: “The reduction will take place in a few years, if the melting of polar ice caused by global warming continues at this rate”.

The King of the Arctic, explains the environmental association that carries out the conservation project “Last ice area” at the North Pole, is “already classified among the vulnerable species in the red lists of the International Union for the Conservation of Nature (IUCN) and climate change caused by human activities is making its habitat and survival increasingly fragile. Polar bears need sea ice to be able to move and go in search of food but if the melting trends of the polar ice caps and the disappearance of suitable habitats continue as in recent decades, from today to 2050 we could lose up to 30% of the population polar bear. “

Confirming this terrible prospect, according to the Polar Bear International organization, the bear population in Hudson Bay, Canada, has already suffered a 30% reduction between 1987 and 2017. The study conducted by the University of Washington is published in Ecological Applications, which explains how the reproductive rate of this majestic species has decreased. By comparing the photos of the bears that inhabited Biffin Bay, a large expanse of ice between Canada and Greenland, in the 90s with those who currently live there, scholars have seen that polar bears appear thinner, hungry and with less cubs .

Furthermore, in the period 2009-2015 the bears seem to have spent about 30 days more on earth than the reference period 1991-1997, thus demonstrating that they have directly experienced the effects of the melting of sea ice to which their existence is linked . More time on the banks waiting to hunt seals also means loss of body mass for bears, which is essential for surviving with sub-zero temperatures.

“To ensure a future for the polar bear, it is necessary first of all to fight against climate change – states the WWF – by acting directly on the causes that are causing global warming, the main cause of the disappearance of the polar bear habitat. This is why we must put pressure on governments and companies, focusing more and more on energy from renewable sources and drastically cutting the CO2 emissions caused by fossil fuels, responsible for the greenhouse effect and rising temperatures “.

Although climate change remains the primary threat to the polar bear’s survival, this large predator faces many other risks. The oil and gas extraction industries are turning their interests towards the Arctic, increasing the risk of accidents and habitat destruction. Oil spills can poison bears, poisoning the habitat and prey they feed on. Polar bears are also sadly exposed to toxic chemicals such as pesticides, which are taken in through prey. Real endocrine disruptors, pesticides alter the physiology of the species and its ability to reproduce.

“As if all this was not enough – the association continues – the melting of sea ice, caused by climate change, is at the basis of the increase in conflicts between man and the polar bear: in the summer in the villages hungry bears they go in search of easily accessible food. Fortunately, local communities are learning to adapt to the presence of the polar bear and to take preventative measures to reduce the risk of conflict. “

WWF has been working for years to combat the threats facing polar bears and to secure a future for them. Everyone can decide to adopt a polar bear and support WWF research, monitoring and conservation projects in the field which, like the one mentioned, are crucial for the survival of this large carnivore.

Cutting back on meat consumption will prevent the next pandemic

Circular economy is number one priority of European Green Deal

I forget why I eat