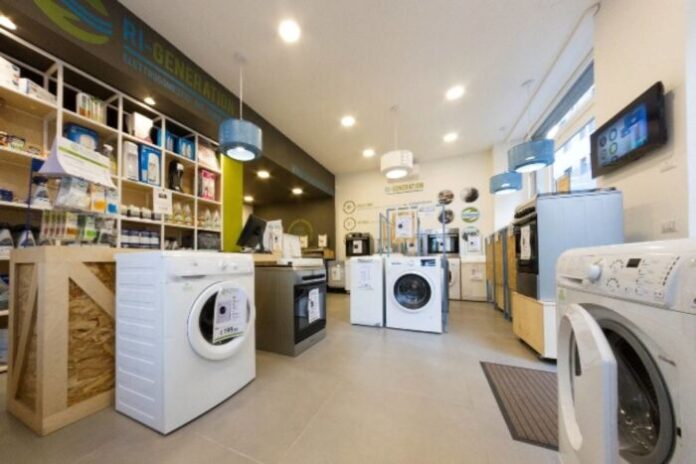 Since 2017, the Ri-generation project, initiated by Turin-based Astelav, has given new life to washing machines, ovens, dishwashers and refrigerators now destined for landfill, doing good for the environment and creating jobs and inclusion. The remanufactured appliances were sold at an average price 50% lower than the new one and a circuit was created where even the socially disadvantaged have a second chance. Thanks to “Ri-generation”, over 3,000 appliances were managed in two years, avoiding nearly 200 tons of waste from electrical and electronic equipment, the so-called WEEE. These have been recovered from the “circuit against one”, which gives the consumer the possibility to deliver the old appliance to the retailer when buying a new one, or through donations in the Turin area and province.

«We started with two people employed in this project. Today we count 11», says Ernesto Bertolino, marketing representative of Ri-generation and director of Astelav company in Vinovo (TO), leader in the sector of spare parts for appliances with almost 60 years of history and a presence in 80 countries worldwide. «We have put our knowledge of household appliances and the availability of spare parts at the service of the circular economy, emerging from that disposable mentality that is increasingly widespread. At the same time, we have given value to important social implications by offering, in collaboration with the Sermig (Youth Missionary Service), a second chance for those who have been marginalized from the world of work and transferring skills to young people from difficult social contexts».

The result is a laboratory that powers a sales network consisting of the e-commerce site www.ri-generation.com and two stores (in Turin, via Mameli 14 and in via Saluzzo 39 / A), it gives new job opportunities and creates a training network dedicated to unaccompanied minors. Ri-generation bears witness to a new model of economy that Bertolino calls “civil”. He explains: «Waste recovery, job reintegration and training for children: it is a circuit that does good».

The WEEE used comes from the one-to-one circuit, or the possibility given to the consumer to deliver the old appliance to the retailer when buying a new one, or from donations in the Turin area and province.

«Household appliances, whether they are WEEE or donations, are chosen based on certain quality and seniority characteristics; therefore, after careful screening, they are repaired using original spare parts. Subsequently they are tested and sanitized in the Ri-generation laboratory, at Astelav, by a team of specialized technicians with years of experience in the repair of household appliances. Once the perfect functioning has been verified, they are then put on sale», continues Bertolino.

The guarantee is 12 months and relies on the Astelav distribution network that covers the entire national territory. To enter this regeneration circuit are essentially large medium-high quality appliances. «Thanks to our economies of scale, we can also intervene on those devices whose repair is often not recommended due to the impact of the cost – he adds – This allows us to offer a high quality product at an affordable price».

The human aspect of the project has an important role: the second possibility is not only given to appliances but also to people. «From the beginning we have seen the potential of this project to give people new opportunities. Sharing the fight against waste and the promotion of a culture of reparation, with Sermig we intercepted those who had acquired skills in the sector but had been excluded from the labor market, but also young people with a difficult social background».

The transfer of knowledge – which in the field of repair is fundamental – is also fed by the training courses which, from last year together with the Salesians of Turin, Astelav offers to the children. He explains: «There are 100 hours for unaccompanied minor children, including migrants, for educational and training purposes to acquire more knowledge and concrete tools that can facilitate a social reintegration at the end of the studies. To the 30 hours of theory, the 70 of practice are added. At the end there is the possibility of doing a three-month internship in our laboratory».

Always a champion of the right to repair against the so-called programmed obsolescence, Astelav with Ri-generation has given substance to the regenerated appliance. Bertolino concludes: «Ri-generation business volumes are growing by 30-40% every month. Today we are in a position to manage more than 2,000 appliances per year». Re-generation gives them new life and prevents them from ending up among the 310 thousand tons of electronic waste collected last year in Italy.

Climate change: abnormal location of a wolf pack near the coast