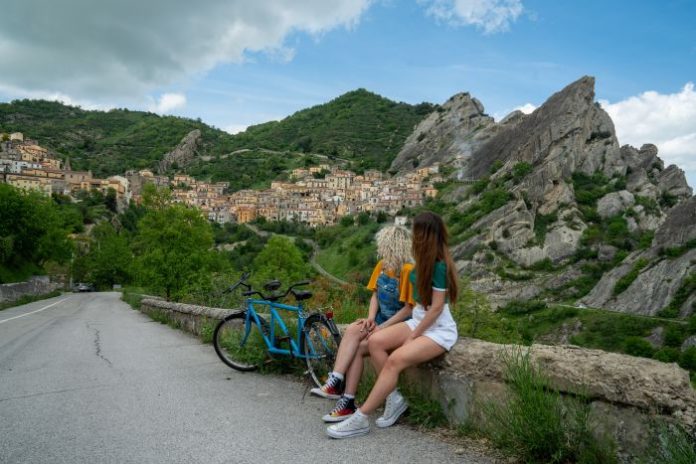 Bicycle tourism knows no seasons: it is always the right time to get on the saddle and discover the beauty of the Italian territory, riding in harmony with the nature that surrounds us. An excursion of just a few hours in the parks outside the city, a weekend on two wheels along the wine roads, a bike trip with friends or family, but always at a slow pace, coming into contact with the cultural, historical, scenic and gastronomic riches of our regions. Each season offers unique views, opportunities and moments. And thanks to the e-bike, the experience of cycling tourism is truly within everyone’s reach.

And what could be better than a holiday along the cycle routes that have won the Italian Green Road Award 2021? Also known as the Italian Cycling Tourism Oscar, the prize is awarded each year to the “green roads” of those Italian regions that have distinguished themselves in their attention to “slow” tourism and that have been able to enhance the value of their cycle paths by completing them with services suitable for the development of cycling tourism.

These are the “Oscar cycle routes” which, naturally, can be covered in stages or even just for a stretch, depending on the type of excursion you want to undertake.

IN TRENTINO on the Green Road of Water

The Trentino region is renowned for its decades-long commitment to green tourism and the promotion of cycling routes. The Green Road dell’Acqua (first prize, ex aequo with the Ciclovia dei Parchi in Calabria) is a 143 km long cycle-pedestrian ring-route, born from the ambitious project of the Autonomous Province of Trento to unite a selection of already existing sections of other cycle-pedestrian and cycle routes to create a more complete itinerary through the valleys, rivers and lakes of lower Trentino, whose common denominator is water. Most of this route, moreover, is built on river banks, as well as disused roads and railways: a respectful recovery and an important enhancement of the territory.

Well signposted and equipped, the Water Green Road begins at the border with the province of Bolzano, at Cadino di Faedo and, after crossing 20 municipalities, ends in Trento. Water is the protagonist of the route, which winds between the Adige River and Lake Garda and other lakes and streams, skirting vineyards and panoramic points. In addition, part of this itinerary is served by an efficient extra-urban public bike sharing system, perhaps the most extensive in Europe, with 90 cycle stations, 1000 parking spaces and 60 kilometres of connected network.

The victory of the Ciclovia dei Parchi della Calabria (ex aequo with the Green Road dell’Acqua in Trentino) at the 2021 edition of the Italian Cycling Tourism Oscar recognises the Region’s commitment to a new project to enhance sustainable tourism and slow mobility through an itinerary that links the four main nature areas in the region, converting the extensive network of paths, Apennine routes and minor roads with low traffic into a cycle route to be explored.

The Ciclovia dei Parchi della Calabria is a green road that crosses the entire 545 kilometres of the regional Apennine ridge; it starts in Laino Borgo (in the province of Cosenza) and ends in Reggio Calabria, covering a very large protected area of about 350,000 hectares along four natural parks – Aspromonte, Sila, Pollino and Serre – and through more than 60 cities, towns and villages that embody the “Calabrian spirit”. The type of paving alternates between asphalt and gravel and many kilometres are for the exclusive use of cyclists and pedestrians. The route is signposted and equipped with water fountains, bike centres, places to stop and hospitality. For those who want to cycle a stretch of the Ciclovia dei Parchi, a dedicated website is very useful, presenting the tour divided into various stages, with detailed information, route lengths, maps and GPS tracks: www.cicloviaparchicalabria.it.

Inaugurated on 13 April 2021, the 46 km section of the Ciclovia del Sole (on the former Bologna-Verona railway line) linking 10 municipalities in the provinces of Modena and Bologna, from Mirandola to Sala Bolognese, came second at this year’s Italian Green Road Award. An Oscar-worthy route for the recovery of disused railway premises and the reconversion of the track with an intervention considered “textbook” among the best practices of cycle tourism.

Signposted and equipped with rest areas – equipped with e-bike and mobile phone recharging points, water fountains and repair kits – the cycle path is interconnected with the existing local road network and, thanks to the ease of the route, is perfectly suited to families and budding cyclists. The itinerary, through the evocative landscapes of the Emilian plain, fully interprets a new idea of travel capable of combining slow and careful discovery of the territories with greater environmental sustainability.

The Ciclovia del Sole is part of the wider European route Eurovelo 7, which connects Cape North in Norway to Malta along 7,400 km. In Italy, the Brenner-Verona section has already been completed, while Emilia Romagna is the lead region for the Verona-Bologna-Florence section of about 400 km, 154 of which are in Emilia Romagna.

For further information on the route: cicloviadelsole.it

IN THE MARCHE region on the Great Ascolan Boroughs Ring (GABA)

Wanted by the Marche Region in response to the growing demand for outdoor tourism in the aftermath of the first Lockdown 2020, the Grande Anello dei Borghi Ascolani (GABA) is a new cycling and pedestrian route with a historical and naturalistic theme that won 3rd place in the Italian Cycling Oscar 2021.

The itinerary is a ring of 100 kilometres – divided into 7 stages of 15 kilometres each – that links Ascoli Piceno to the most characteristic places of the pre-Apennine hinterland, highlighting its naturalistic, cultural and eno-gastronomic peculiarities. A journey through the magnificent hillside villages at the foot of the Ceresa and Monti Gemelli mountain ranges, including the municipalities of Ascoli Piceno, Venarotta, Roccafluvione and Acquasanta Terme. The paving is mixed and alternates between dirt roads and paths, especially mule tracks used by the inhabitants to move from one village to another, and paved sections. The route is signposted and equipped with bicigrilles, water fountains and assistance, as well as refreshment points and accommodation in the towns crossed.

IN BASILICATA from Matera to the Lucanian Dolomites

At the 2021 edition of the Italian Cycling Tourism Oscar, the Legambiente special mention went to the Basilicata Region for the cycle route from Matera to the Lucanian Dolomites. From the City of Sassi, UNESCO World Heritage Site and European Capital of Culture 2019, the route crosses the Murgia Materana park and, skirting the extraordinary ecosystem of the WWF San Giuliano oasis, reaches the Piccole Dolomiti Lucane, through the Gallipoli Cognato park. A total of 114 kilometres of nature reserves and perched villages along a route that is mainly paved, marked and equipped with bicigrill, water fountains, assistance and the possibility of refreshments and hospitality in the municipalities crossed. For info: basilicataturistica.it

The 2021 Oscar-winning cycle routes will enrich the medals list of the Italian Green Road Award. In the past five editions the following have won the Oscar: UMBRIA with the Assisi-Spoleto-Norcia cycle path, FRIULI VENEZIA GIULIA with the Alpe Adria cycle path, VENETO with the Friendship cycle path, ALTO ADIGE with the Via Claudiana Augusta and ABRUZZO with the Bike To Coast.

The Italian Green Road Award was born six years ago with the idea of enhancing the territories, and in particular the small villages, and their investments for the development of cycle tourism along the green routes. The bicycle tourist is a zero-impact itinerant traveller who respects the environment, uses tourist services, visits museums, buys thematic tours, wine and food products and contributes to the tourist upgrading of the territories.

Sea, the marine pollutants that kill the corals of the Mediterranean

Economic and environmental sustainability: the green recipe for recovery