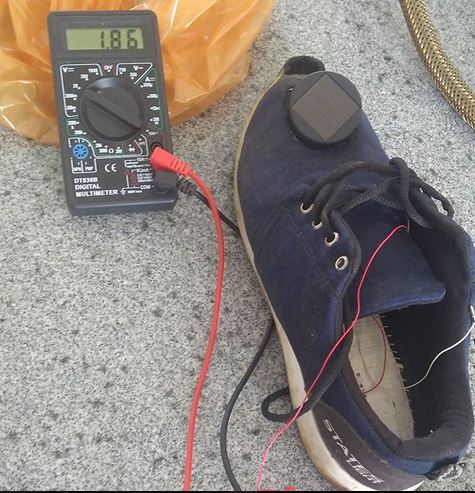 Shoes able to generate electricity simply by walking: this is the idea of ​​a group of Francisco da Conceição Menezes State College students from Santo Antônio de Jesus (Brazil), who developed the prototype of sneaker that produce clean energy while walking. The purpose? Reduce the use of electricity from the grid and favor renewable sources.

The name of the shoes is indicative, EletroTênis. Oziel Silva, the physics teacher coordinator of the project, explains that thanks to a circuit put on the shoes they are able to produce a quantity of electricity sufficient to illuminate the LED devices, to charge a mobile phone via USB or to store data on a portable hard disk.

The energy is generated by pressing the bearings connected to the shoes during the walk and the nice thing is that it is absolutely clean, as reiterated by the professor himself:

“The main forms of power generation cause serious environmental impacts and are expensive. The power of the ElectroTennis is that it is clean and can be used in many ways, including archiving for later use or to immediately charge a mobile phone via USB “.

The device is already working but the team is working to improve it and make it more efficient. Piezoelectric bearings connected to sneakers generate energy when tightened or pressed, which happens right when you step on the floor. Furthermore, the product is perfectly safe.

“We have insulated the circuit with insulating tape, just to avoid defects that could cause a short circuit,” explains the professor.

The prototype, created by students Cauan Sampaio, Gustavo Pereira, Luis Fernando, Matheus Cabral and Zidane Victor with the support of Professor David Barreto, was selected to participate in the Porto Alegre Scientific Fair. Students expect it to represent a small revolution in the field of renewable energy and in reducing the use of electrical outlets.

Graphene battery, it is ecological and makes our smartphones last longer

Arctic on fire, in Siberia burned 3.2 million hectares of forest....

DISCLAIMER
All product names, logos, and brands are property of their respective owners. All company, product and service names used in this website are for identification purposes only. Use of these names, logos, and brands does not imply endorsement.
Contact us: redazione@smartgreenpost.it
FOLLOW US
© Copyright 2019 - INFO CONSULTING | VAT IT01811500766 | Green news blog.