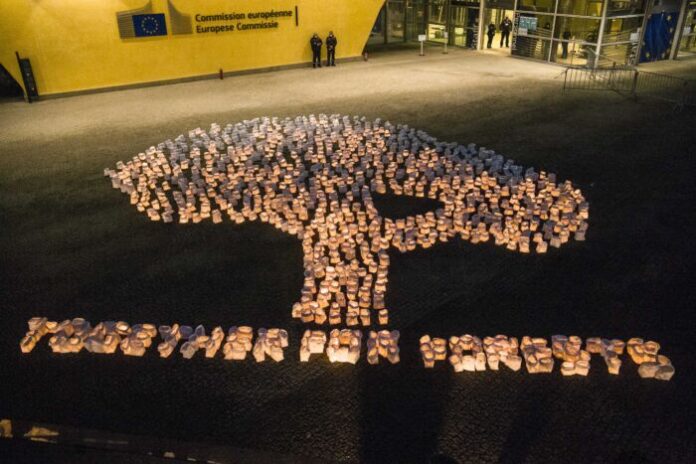 A few days ago, the European consultation “Deforestation and forest degradation – reducing the impact of products placed on the EU market” ended a few days ago, which thanks to the numerous accessions received will be remembered as the largest public consultation of the EU on environmental issues held till now.

1,193,652 people participated to ask the EU to guarantee with EU legislation that products linked to the destruction of forests and the violation of human rights do not reach our homes. In Italy alone, more than 75,000 people signed up.

This is the most participatory public consultation on environmental issues in the history of the EU, and the second largest ever. The outdoor space of the European Commission’s Berlaymont building for the occasion was decorated with 1,193 lanterns, representing the 1,193,652 people who signed the # Together4Forests petition.

Today the European consumer bears responsibility for the purchases that have contributed to deforestation. “It is time for the European Union to act, shifting this responsibility to manufacturing companies, to carry out investigations on the raw materials purchased which, if suspected of being linked to the destruction of nature and the non-observance of human rights, must be discarded. This appeal of over a million people cannot be ignored, ”the WWF strongly states.

European Green Deal Executive Vice President Frans Timmermans said: “All of us Europeans will have to open our eyes to the fact that our consumption can lead to the destruction of forests in other parts of the world, and at an alarming rate. Each of us, as an individual consumer, must make responsible and informed choices. As a political leader, you have my commitment to take strong action to address the issue of deforestation in all our actions ”.

Virginijus Sinkevičius, EU commissioner for the environment, oceans and fisheries, added: “The fight against deforestation is an emergency, and we are determined to act. I am grateful and encouraged to see that over a million people have mobilized to support this goal. This demonstrates unprecedented awareness and concern. As a European Commissioner, I am committed to addressing this challenge with efficient and mandatory measures under our European Green Deal. “

The objective of the coalition is to quickly obtain a robust and effective European Regulation, capable of guaranteeing consumers the extraneousness of the products purchased to deforestation, the transformation of natural ecosystems (natural savannahs and grasslands) and violations of human rights. outside the EU. This law should also be applied to the financial sector that invests in these productions. Indeed, Europe’s demand for consumer products such as beef, soy for animal feed, leather, coffee, cocoa, rubber and palm oil, is driving the world’s forests and nature. at the limit.

A powerful example is EU soy imports which, together with China, are responsible for more than half of all soy exported from Brazil. EU soybean imports, however, come more often from ‘deforestation frontiers’, such as the Amazon rainforest and the Cerrado prairie, and a recent study estimated that one-fifth of EU soybean imports from Brazil could come from illegally cleared land.

Between August 2019 and July this year, the Amazon lost over 11,000 square kilometers, an area equivalent to over one and a half million football fields, destroyed mainly to produce feed and meat that also arrives on our tables. The numbers of the adhesions to the consultation speak clearly about the will of European citizens.

“The Commission listens to these requests and approves stringent EU legislation that puts an end to the circulation on the European market of raw materials and products whose extraction, harvesting or production has or risks having a negative impact on forests, other ecosystems and human rights”, Greenpeace concludes.

Switzerland shuts down the first of its five nuclear power plants