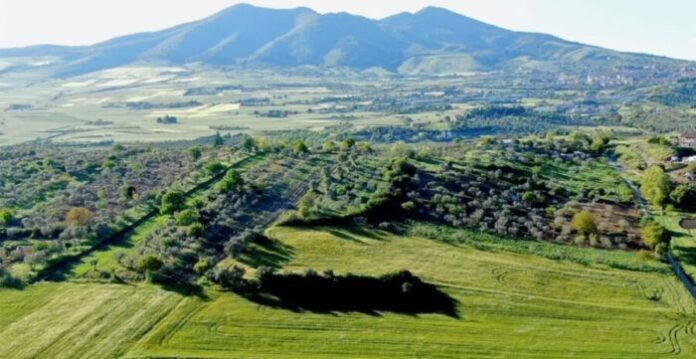 The Vulture is pleistocenic volcano localized in the north of Basilicata and it is the highest mountain of the southeastern sector of the Apennines with its 1327 m a.s.l., and also the easternmost volcanic centre of the whole Italian magmatic province. Indeed all the Italian volcanoes are located along the pery-thyrrenian sector of the peninsula, where crustal thinning favour the uprising of magmas and deep fluids from the terrestrial mantle; while the Vulture Mt. is located at the front of the chain-foredeep-foreland system where there are conditions of strong crustal thickening that would not favour volcanic manifestations fed by magma uprising.

everal geophysical, structural and geochemical studies permitted to hypothesize, with a good agreement of the data, that the Vulture is located in correspondence of an important transfer fault at a regional scale cutting transversely the whole Italian peninsula along a direction from Paestum  to Trinitapoli (although with a complex geometry); the trastensive cinematic of this fault have permitted the magma uprising and the feeding of the Vulture volcanic activity.

In addition, recent geochemical researches performed on the numerous thermal springs and gas emissions located along this tectonic structure highlighted the mantle origin of these gases, supporting the idea that this fault represent a preferential way of uprising for deep fluids and magma. The volcanic products erupted by Vulture are mainly characterized by pyroclastic flow deposits and fall-out deposits of ashes, lapilli and, subordinately, by lava flow deposits, supporting the idea of a complex eruptive story mainly with an explosive style.

The whole volcanic sequence were divided in two super-groups (named super-synthem of Monte Vulture and of Monticchio), incorporating not only the primary volcanic products but also the epiclastic deposits due to erosion, during extended phases of volcanic stasis (in order from hundreds to thousand of years). Several erosive surfaces and alluvial river structures are visible around Rionero in Vulture and Barile centres, cutting the pyroclastic sequences for all the volcanic area. The first eruptive deposits were dated around 674 kiloyears at Foggianello and then the major volcanic products were erupted from a central cone, building the whole volcanic structure.

These are the products grouped in the super-synthem of Monte Vulture, representing the most extended and voluminous sequence of the volcano. The most recent of these were dated around 557 kiloyears and are relative to the Haüynofiro of Melfi. This is another peculiarity of the Vulture volcano, because it’s constituted by a lava dome (the hill where raises the Frederick II Castle) erupted in lacustrine environment (Melfia lake) by a decentralised volcanic centre and it’s characterized by the abundance of Haüyna, a particular blue colour mineral, present in determined condtions only in few volcanoes in the world. In general, in almost all mineralogy books were reported Haüyna lava samples from Melfi, with big phenocrystals visible to naked eye (photo 2).

The first eruptive phase of the Vulture volcano ended with the Melfi lava dome eruption and reprised after an extended period of volcanic stasis, during that erosive processes significantly consumed the vulcanites. The reprise of the volcanic activity formed several craters in decentralized position respect to the volcanic cone, in an environment characterised by some small lakes, which deposits resulted coeval to the new vulcanites.

The products of this second volcanic phase are grouped in the Monticchio super-synthem, which highlighted a limited areal dispersion and erupted by secondary independent centres all around the volcano and also in external position. In detail, there were two volcanic phases forming several craters (including the two maars of the Monticchio lakes), aligned along a tectonic structure which determined the volcano-tectonic collapse of the southern sector of the volcano.

This fault, named Fosso del Corbo – Valle dei Grigi (FC – VG in the map above) strongly influenced: the morphology of the area, the eruptions (exclusively characterised by explosive events, that laterally demolished the western and the south-western portion of the central cone) and, ultimately, the groundwater circulation enriched in gas and mineral content, forming an hydro-mineral basin exploited by several water bottling industries, located at the tips of this important tectonic structure.

In the final stages of the volcanic activity of the Mt. Vulture, were erupted carbonatites, volcanic rocks derived by crystallization of magmas mainly with a carbonatic composition highlighting a mantle contamination (silicate magmas source) with carbonatic lithologies belonging to the Apulian plate, in subduction above the Apennines. At the end, the geological peculiarities of this volcano reflect the particular geodynamic conditions in this sector of the Apennines, and more in general oh the Mediterranean region, the understanding of which is an important research goal both for simply academic point of view and for practical applications.

A skyscraper of trees to fight deforestation

Cingolani: ‘If it’s too hot, we’ll have to spend the summer in Germany’