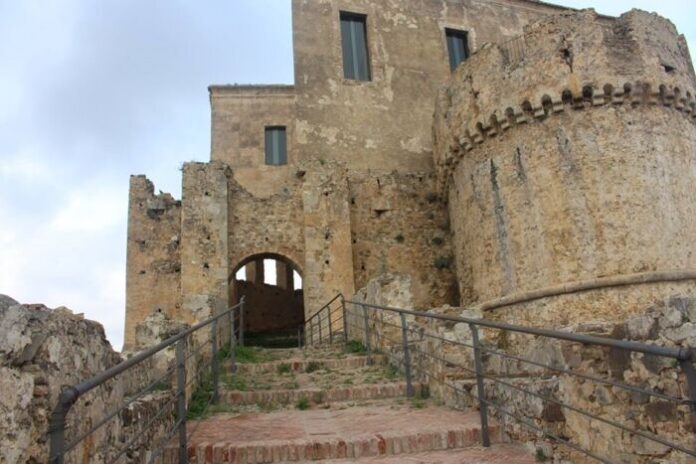 Passing through the places where the Basilian monks lived, the traveler will find himself walking through hills, villages, paths close to the sea and wooded mountains. This is the Basilian Way, made up of 44 stages (56 if we consider the extended variant) which runs through Calabria from north to south for 955 km. online to download the GPS tracks and with all the explanations relating to the individual stages and places to find hospitality from 10 August.

The journey starts from Rocca Imperiale, a medieval village that already stands out in the distance for the size of the beautiful Swabian Castle with its walls; walking through the village is extremely pleasant: the narrow streets and beautiful churches attract the attention and admiration of the walker. The village is known for being the “Country of Poetry”: through the streets of the village you can read the various steles with the poems placed on the walls of the houses.

One of the unforgettable stops is that of Nocara with the Monastery of Santa Maria degli Antropici; it is a convent located on a panoramic terrace overlooking the valley of the Ragone stream which currently houses a hotel restaurant. In the monastery it is still possible to see a furnace and many remains of frescoes on the walls; suggestive is the visit to the chapel, where recent excavations have intercepted an existing building.

Among the other places we can mention Civita, famous for its naturalistic heritage with the Devil’s Bridge, the Raganello Gorges, the Timpa del Demanio and the Pollino Park; the Raganello torrent creates a canyon, 13 km long and up to 400 meters deep, between San Lorenzo and Civita. Trekking between the waterfalls, the pools of crystal clear water and the natural slides, obviously guided by experts and well equipped, is an irreplaceable experience.

Walking through these places also means meeting traditions and culture; the union between the Calabrian and Arbëreshe culture will lead the traveler to know a particular food and wine heritage and characteristic structures such as the so-called “houses of Kodra” or “speakers”, a sort of homage to the Italian-born Albanian painter Ibrahim Kodra, internationally renowned. They are very small houses, with windows, chimney and chimney; their facade recalls the human face.

In Campana you can see the Giants of the Incavallicata, two cyclopean stone sculptures in which we wanted to recognize an elephant and a warrior; they date back to an unspecified period and, according to some studies, it was excluded that they are natural formations. Further on we cannot fail to mention San Giovanni in Fiore with the Florense Abbey, the Norman Arch and the archaeological site of Jure Vetere, the place where the first Florentine foundation was built by the abbot Gioacchino da Fiore.

Another unmissable stop is Squillace with its medieval settlement and castle inside and the beautiful archaeological park of Scolacium towards the coast; visiting the ancient Scolacium is a real journey through time with the forum area, the theater and various buildings from the Roman era, in which it is not difficult to see the change of functions that occurred in the late antiquity. The forum was, for example, occupied by huts and productive activities. The Basilica of S. Maria della Roccella, dating back to the end of the eleventh or the first half of the twelfth century, welcomes you to the park; it was erected by the Normans and stands on the ruins of a Roman building, perhaps thermal, and may have been preceded by a Basilian monastic complex.

After the Greek Orthodox Monastery of San Giovanni Theristis of Bivongi and the Cattolica of Stilo, one cannot avoid passing through the medieval village of Gerace, with the ruins of the castle, the beautiful Concattedrale and the numerous churches; its location in the Aspromonte National Park makes it a truly precious and rare jewel.

The path still winds through many villages and picturesque landscapes up to Pentedattilo, a ghost village perched on the cliff of Monte Calvario, with a characteristic shape reminiscent of a cyclopean five-fingered hand, from which the name of the village derives. The last days are to be dedicated to Fortezza San Niceto, a Byzantine fortification built in the first half of the 11th century on the top of a rocky hill, and to Reggio Calabria, with its spectacular seascapes and the historic center, from the Aragonese Castle to the magnificent Duomo up to churches and museums.

After a long journey in a land, in its smells and flavors, in beauty and in nature, you will return home as at the end of each journey, deeply changed and in love.

Iceland held a funeral for its first glacier lost

From plants a winning weapon to fight climate change

United in Science report: Climate change has not stopped for Covid19