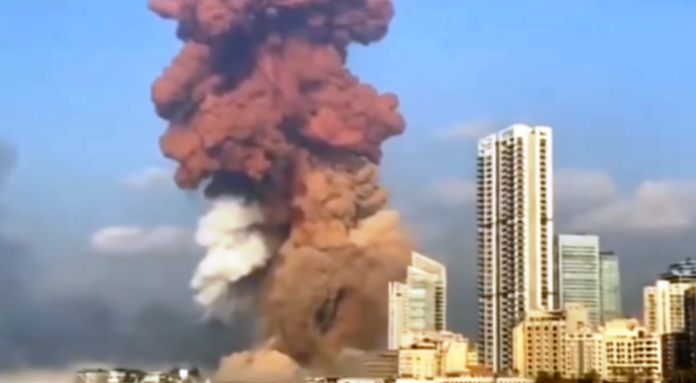 Yesterday’s explosions in Beirut have caused invaluable damage to the Lebanese population and the environment. A few hours after the disaster, Lebanese health minister Hamad Hasan advised anyone who could leave Beirut, devastated by two powerful explosions that left over 100 dead and 4,000 injured. Hasan – quoted by the local media – states that dangerous materials released into the air after explosions could have long-term fatal effects.

The detonations that razed much of the city to the ground were caused by a fire in a depot in the port of Beirut where 2,750 tons of ammonium nitrate were stored, seized several years ago by a ship and left there in unsafe conditions, such as confirmed by President Michel Aoun, quoted by the BBC online, after an emergency meeting of the Supreme Defense Council in the presidential palace in Baabda. In a tweet, the president declared it unacceptable that 2,750 tons of ammonium nitrate were kept in unsafe conditions. Furthermore, he ensured that an investigation is underway to find out what caused the explosion.

What is ammonium nitrate

Ammonium nitrate (the formula is NH4NO3) is a chemical compound which, due to its characteristics, is extremely versatile and inexpensive to produce. For this reason it is widely used in various areas, such as industrial or, to a greater extent, in agriculture. In fact, it forms the basis of numerous fertilizers (90% of its production on the market serves this purpose). It is also the main compound of instant ice.

Produced in the form of small porous and highly soluble granules, it is also one of the main components of many types of explosives. Two are the ones most used over the years: the ammonal and the Anfo (Ammonnium Nitrate Fuel Oil). It is used both for civilian purposes – for example in mines and quarries, where it is detonated after being mixed with fuel – and for military and terrorist purposes.

It is mainly extracted in the Atacama desert in Chile, where the largest deposits are located, and represents 80% of all industrial explosives used in the United States. Today almost 100% of the chemical used is synthetic, produced by reacting ammonia with nitric acid. Relatively stable, it is cheap to produce. Known more commonly with the name of saltpeter, it is classified as dangerous material and therefore subject to a series of regulations.

Ammonium nitrate does not ignite itself. However, it can act as a catalyst to accelerate the combustion of other materials. At remarkably high temperatures, however, ammonium nitrate can decompose producing gases including nitrogen oxides and water vapor. The release of these gases is capable of causing an explosion.

The disaster that occurred yesterday in Beirut is not an isolated case, there are at least two other sadly famous episodes that have involved ammonium nitrate. In Texas there have been two explosions caused by this compound. The latest was on April 17, 2013 when 14 people died in West Fertilizer, a Texas fertilizer industry, and over 200 were injured. In 1947, also in Texas, nearly 500 people died from an explosion of about 2,300 tons of ammonium nitrate. In August 2015, in Tianjin, eastern China, 110 kilometers southeast of Beijing, 173 people died from the explosion that occurred in a chemical factory where flammable chemicals and ammonium nitrate were stored.

Consequences for the environment and human health

Lebanese health minister Hamad Hasan spoke of toxic air and dangerous health damage. Let’s see why. An explosion of ammonium nitrate releases huge quantities of nitrogen oxide, a stinking gas with a brown red color, as noted by the reddish cloud in the images of the explosion. Nitrogen oxides are present in urban pollution, but at high levels they can be particularly dangerous for people who have respiratory problems.

In Italy nitrogen dioxide is very common among atmospheric pollutants due to the high use of gas, both for cooking and for heating.

Nitrogen dioxide, produced as a result of the Beirut explosions, has a pungent odor and can cause eye, nasal or throat irritation and coughing. Nitrogen dioxide is an irritating gas for the mucous membranes and can contribute to the onset of various changes in lung functions, chronic bronchitis, asthma and pulmonary emphysema. Long exposures even at low concentrations cause a drastic decrease in lung defenses with a consequent increase in the risk of diseases of the respiratory tract.

Changes in respiratory function can occur in sensitive individuals, such as children, asthmatics or people with chronic bronchitis.

The effects of nitrogen dioxide generally occur several hours after exposure, so that people often do not normally realize that their malaise is due to the polluted air they have breathed.

For nitrogen dioxide, the World Health Organization (WHO) recommends the hourly guide limit of 200 µg / mc, the limit for the annual average is 40 µg / mc instead. For a half-hour exposure, the concentration of 560 µg / mc is the highest concentration at which there are no detectable effects. Short exposures to 50-150 mg / mc cause lung resentments; 100 mg / mc, inhaled for 1 minute, cause considerable damage to the respiratory tract; concentrations of 300-400 mg / mc lead to death from pulmonary fibrosis.

What is the difference between natural, organic and eco-friendly cosmetics

Microplastics in baby bottles, up to 4 million per liter