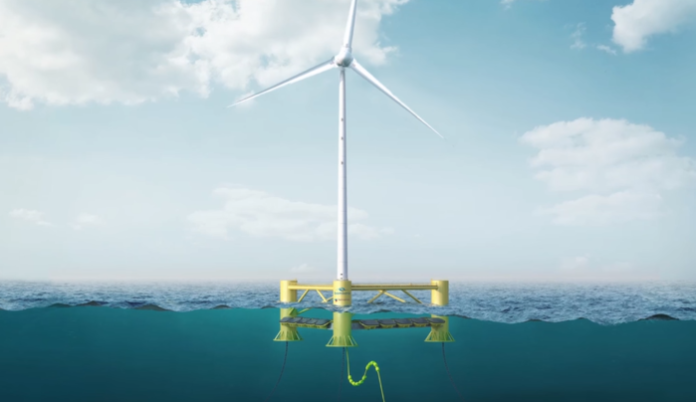 Britain is making great strides in the renewables sector. Not only does the energy used come for the most part from renewable sources, but we continue to invest in new technologies to make the energy transition as fast and effective as possible.

The new challenge is to make the most of energy production from the sea and, in this regard, the British TechnipFMC has joined forces and know-how with the Australian Bombara to design an innovative floating marine plant. A joint effort that results in the InSPIRE project.

The initiative aims to bring the leveled cost of energy from the sea below 50 MWh by 2030. How? The companies are implementing a special floating platform that houses a traditional offshore wind turbine in the upper part and, in the semi-submerged portion, Bombora’s mWave units, capable of generating electricity from wave motion.

Specifically, the mWave features a series of concave cells covered with an air-inflated rubber membrane. When the waves pass over it, the air is pushed out of each cell through a series of valves in a one-way duct, and then swells naturally. The flow of air drives a turbine which in turn starts a variable speed generator.

Bombara is not new to this type of solution. The company is already testing its small modular power plants in a 1.5 MW experimental project off the coast of Pembrokeshire, Wales.

From its earliest stages of development, the technology appeared as the perfect complement to floating wind turbines. In this way, energy is produced from the sea by exploiting two different sources at the same time but using the same submarine cable to transfer electricity to land. A solution that appears efficient, as well as cheaper than others that use only one type of energy.

“The emerging floating offshore wind market is about to set sail and should contribute 400 GW of renewable energy globally by 2050,” the project website reads. “Until now, efforts to reduce the leveled energy cost (LCOE) of floating wind power have focused primarily on increasing turbine rotor diameters. InSPIRE responds to the LCOE challenge with a new solution. A cost-competitive innovation that can provide more renewable energy at a lower cost to facilitate a faster journey to zero emissions and a thriving blue economy. “

In a first demonstration phase, the project should first test a 6 MW plant, of which 2 MW from wave motion and 4 MW from wind power. Commercial platforms will then follow, capable of supplying 12 MW and then 18 MW of power.