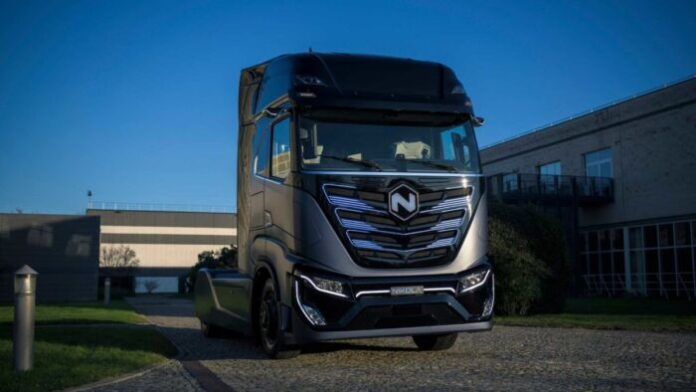 It’s called Nikola Tre and is the product of the joint venture between Iveco and the American startup Nikola Motors, the battery electric truck (BEV) designed for European markets. The Nikola Tre is an electric propulsion tractor developed by the American company that is based on the recent Iveco S-Way, but instead of the traditional thermal engine it is powered by a lithium-ion battery powered engine.

By 2021 the vehicle will be on the market in full electric version and will have an autonomy of about 960 kilometers, while starting from 2023 the commercialization of the version with hydrogen-powered fuel cells, i.e. with fuel cell which in turn they produce the current needed by the electric motors.

The project is by Chn Industrial and Nikola, the American start-up that “promises” to revolutionize the world of trucks thanks to the zero-emission powertrain systems. By the third quarter of next year, the road test phase of the Nikola Tre in Bev (Battery electric vehicle) version with a total capacity of up to 720 kWh is expected, then between 2020 and 2021 the prototype of the fuel cell version will be developed (Fcev – fuel cell electric vehicle) which will then be tested by a network of selected customers. The powertrain will have a power of 480 kW of energy and a maximum torque of 1,800 Nm.

The electric battery version (BEV – Battery Electric Vehicle) will be on sale from 2021, the electric fuel cell version (FCEV – Fuel Cell Electric Vehicle) from 2023. Both versions will be designed for the most advanced autonomous driving levels (4 and 5). The idea is to create a modular system where lithium ion batteries and fuel cells will be integrated.

The new models will be produced in Europe both electric with lithium ion and hydrogen batteries even if it is still too early to understand in which plant. The Iveco S-Way line has its production base in Spain, while medium and light commercial vehicles are produced in Italy, but much will depend on the ability of the markets to absorb the new zero-emission line.

The aim of the operation is to break the mold on the heavy haulage market. “We will be able to equalize and surpass the Diesel’s performance”, underlines Gerrit Marx. The model of the future hydrogen distribution network, starting from Europe, will be built on the basis of what has already been created by Cnh with natural gas distributors. However, this is the estimate, seventy stations to cover the entire European network and 10-15 minutes to fill up.

“We have already received many orders for Nikola Tre, more than we are able to produce at the moment, in particular Germany, Norway and Italy” said the CEO of Nikola Trevor Milton, who then explained that the name chosen by the company, with based in Arizona, it is inspired by the inventor Nikola Tesla, exactly like the name chosen by Elon Musk. Natural then the question: Do you want to become the Tesla of Trucks? “We want to do something never done before in the truck world,” the answer.

Athenathon: the European digital marathon for the environment