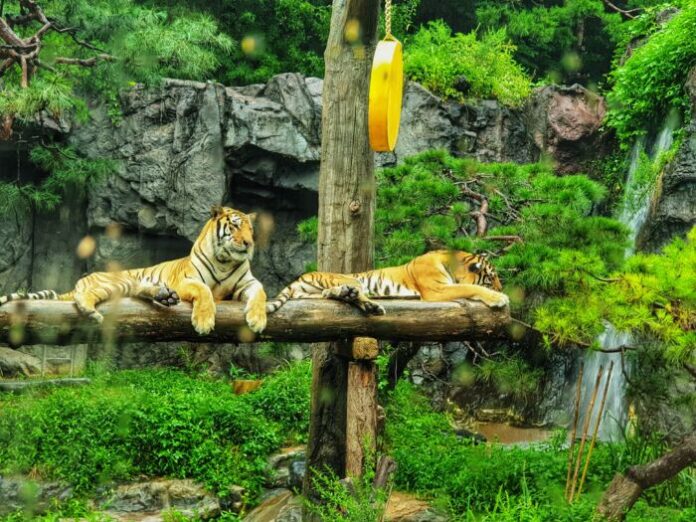 Animals find it increasingly difficult to mate and reproduce, often due to man and his habits. Among these causes of disturbance to animal love, climate change comes first, but also deforestation, noise, light and plastic pollution, poaching play decisive roles.

The impact of the actions carried out by the human species has devastating effects on those animals. From orangutans to fireflies, from elephants to salmon, from turtles to humpback whales, these species are threatened and now more than ever they need a change of course to protect them.

WWF has identified the main human actions that impact the reproduction of animal species:

The orangutan is a typically solitary species. Males actively seek females only during the breeding season. But the rainforests, habitat of the species, are being destroyed at an increasingly rapid rate due to the growing demand for precious wood and land to be converted to palm oil cultivation. Orangutans are thus finding it increasingly difficult to move and move in search of a partner in a fragmented and degraded habitat, and their reproductive rate is worryingly decreasing.

Cetaceans, such as Humpback whales, use complex and diversified emissions of sound waves, at particular frequencies, to exchange fundamental information, such as the location of food, the presence of predators, or to actively search for partners during the breeding season. High levels of noise pollution, mainly caused by ships and boats, appear to be creating serious communication problems for these giants of the sea, and also put their reproduction at risk. The superposition of different sources of noise, in fact, can produce cases of strong stress in cetaceans, with dangerous consequences for the very survival of these splendid animals.

The reproduction of fireflies is endangered not only by the loss of natural habitat and by pesticides, but also by light pollution. Globally, light pollution can even be considered the second most serious threat to fireflies (after pesticides). Artificial light at night has increased exponentially over the last century. The disturbance caused by artificial lighting confuses the mating ritual of fireflies, and often prevents females from finding males of their own species. Many firefly species, in fact, rely exclusively on bioluminescence to find and attract their mates.

Poaching on elephants has severe effects that directly affect the reproduction of this iconic species. In fact, male elephants and some adult females are killed the most, the specimens that have more massive tusks and therefore guarantee greater gains on the ivory black market to poachers. This “selection” made by man is causing important effects at the population level. In fact, more and more elephants are born without tusks. This is due to the fact that, precisely because of poaching, elephants with smaller tusks or without tusks live longer on average and are therefore more likely to reproduce. Thus, the absence of tusks is becoming an increasingly widespread feature in wild populations.

Almost 90% of wild flowering plants need the action of pollinating insects, including bees and butterflies, in order to reproduce. Unfortunately, the increasingly widespread use of chemicals in agriculture and the degradation of habitats are contributing to the disappearance of these vectors of love. In fact, all over the world we are witnessing a dramatic decline in pollinators, which puts entire ecosystems and a large part of human food production at risk.

Salmon are fish that make extraordinary migrations, up to thousands of km. Before the breeding season, they abandon the ocean waters to go up rivers and streams to reach the places where they were born, where they reproduce and lay their eggs. These miracles of nature become impossible when we place dams or other barriers in their path. Thus it happens that salmon, at best, settle for unsuitable habitats in spite of themselves, stopping much further downstream than their instincts suggest, while some, not finding suitable conditions, die before reproducing.

In sea turtles, the sex of the unborn child is decided by the incubation temperature of the eggs, which mothers hide in holes dug in the sand. Warmer nests lead to the birth of females, while cooler nests lead to the birth of males. With the increase in average temperatures caused by ongoing global warming, we could see a total disappearance of male specimens, for a species already threatened by habitat loss, unregulated fishing and plastic pollution.

Global warming also has serious effects on the reproductive capacity of cheetahs, which are increasingly endangered species. In fact, some recent studies show that in the cheetah the increase in environmental temperature causes a net reduction in male fertility, leading to morphological abnormalities and a lowering in the number of spermatozoa, and directly affecting testosterone levels in males. These effects have a direct impact on the reproductive rates of the species, and consequently on its survival chances.

Recent studies show that plastic pollution can be at the root of hormonal problems, which affect the reproductive success of a large variety of marine animals, including killer whales. Killer whales in which high levels of pollutants, known as polychlorinated biphenyls (PCBs), used in many plastics before being banned globally in 2004, were found exhibited much lower-than-normal reproductive rates and a high rate of sterility. The spread of plastics in the sea can therefore have dramatic effects on the populations of these animals.

The fragmentation of habitats in the central Apennines affects the ability of bears to disperse in new areas and meet reproductive partners during the mating season. Roads, motorways, railways and intensely cultivated areas are often barriers that are difficult to overcome, especially for female bears, who tend not to stray from the areas where they were born. The males present in the peripheral areas therefore have great difficulty in finding females to mate with. This phenomenon affects the expansion capacity of the species. In fact, there are very few females with pups found outside the historical areas of presence.

Environmental performance, Denmark rises to #1 in the rankings

Electronic waste, in 2019 it is a record of WEEE worldwide: the UN alarm