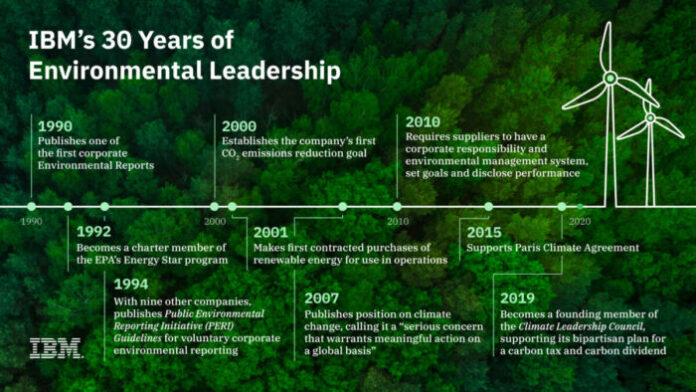 IBM’s operational CO2 emissions have been reduced by 39.7%  since 2005, according to IBM’s 30th annual IBM and the Environment Report. The achievement puts IBM well ahead of schedule in reaching its current goal of a 40% reduction in CO2 emissions by 2025.

“IBM was instrumental in establishing corporate environmental reporting three decades ago because we saw that embracing openness drives results,” said Wayne Balta, vice president of environmental affairs and product safety. “Our continual and dependable progress throughout the years has been underscored by our dedication to transparent reporting and IBM’s values.”

Other highlights from the report; in 2019:

These solutions demonstrate “good tech” and the art of the possible. For example, IBM Research developed an AI-based forecasting and control system that improves electricity storage in photovoltaic systems. And IBM created a digital farming platform that will provide farmers with hyperlocal weather forecasts in addition to offering real-time recommendations tailored to the specific needs of individual fields and crops, helping to increase crop production, save water and decrease the need for fertilizers and pesticides.

The report codifies IBM’s longstanding practice of transparency in carbon reporting to ensure that IBM’s disclosure of energy consumption, CO2 emissions, and renewable energy be done in a way that is clear.

“Climate change represents a serious threat to our planet that must be addressed right now,” Balta continued. “Transparent communications are essential to secure popular support for action.”

In addition to being one of the first multinational companies to produce its own environmental report, IBM also led the creation of the first cross-industry guidelines for voluntary corporate environmental reporting back in the early 1990s. Upon working with industry peers, learning from business associations, and with input from the Coalition for Environmentally Responsible Economies (CERES), IBM and nine other companies published the Public Environmental Reporting Initiative (PERI) Guidelines in 1994. These guidelines marked a beginning of what has since become a common business practice for many companies.

Beyond any distance: ecotourism arrives at home with virtual tours

Electricity, how to reduce consumption and save on bills

The social life of trees