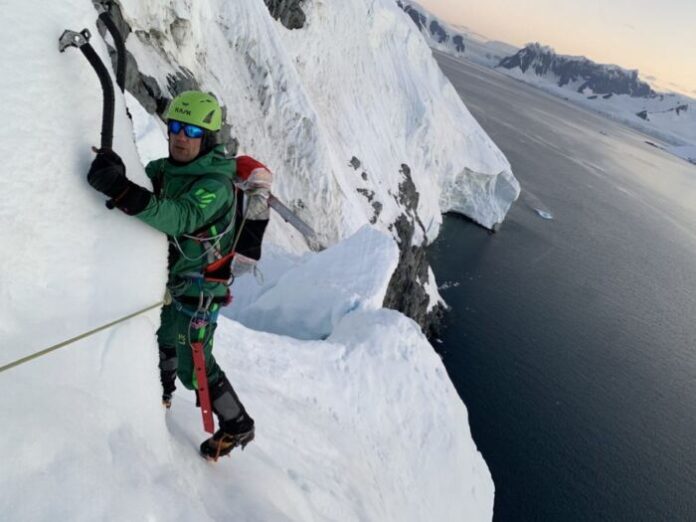 Making innovative fabrics using the microplastics present in the Antarctic ice: this is the final aim of the Antartic Expeditions 2020 promoted by the Biella Section of the Italian Alpine Club, by the central CAI, by the National Research Council (Cnr) with the sponsorship of Città di Biella and of the Cassa di Risparmio di Biella Foundation.

The expedition, which had scientific-exploratory-mountaineering objectives and which ended a few days ago, was attended by Gian Luca Cavalli, Marcello Sanguineti and Manrico Dell’Agnola, all academics of the CAI: the three climbers have in fact collected ice samples that will be analyzed by the Cnr Institute of Polar Sciences to verify the presence of microplastics and tested new garments produced with innovative fabrics.

Cavalli, Sanguineti and Dell’Agnola went further, however, with the climb to the Gateway Ridge (700m), dedicated to the “Third Paradise”, an artistic work by Michelangelo Pistoletto. And just after such an undertaking, the three climbers took a day off.

«We wandered with the Ice Bird» they write in their chronicles «along Neumayer Channel and Borgen Bay, binoculars the walls and the glaciers: Harbor Glacier, William Glacier, Hooper Glacier, Thunder Glacier … From time to time we shoot with the drone. Around us, whales springing up and diving again, penguins jumping out of the water and jumping on icebergs, seals that share icebergs with penguins. For the following days, we plan to make withdrawals for the project with the National Research Council in new areas; for this we plan a couple of ski mountaineering climbs which, among other things, will give us some nice ski descents. On January 19th we climb the Noble Peak (720m).

As usual, the start is rigorously in crampons from the edge of the water, to go up a 45 ° slope and reach the glacial plateau. First we go up the north side. The large crevasses perpendicular to the ascent line force us to continue zigzags, since often, almost as if the glacier wanted to make fun of us, the bridges are located alternately on the far left and on the far right. Then, to avoid some seracs, we climb over the ridge and take a steep slope that leads near the top frames. Going around them on the right we aim to the summit, before which crampons must be worn again. The descent on the north-east side is amazing: the slopes are varied and ideal for trying out all the radii of the curve, while paying attention to the crevasses. After the pickup by Dave, in the same place where he had left the rubber boat in the morning, here we are again celebrating on the Ice Bird».

Cavalli, Sanguineti and Dell’Agnola the next day then leave for Jabet Peak (545m), another ski mountaineering climb combined with samples. «This time too the descent is pure enjoyment», they continue in the story, «including the last icy and steep slope, which forces you to make tight turns in order not to lose control and end up on the cliff. In order not to miss anything, we decide to dedicate January 20 to kayaking. By modifying a bit of an advertisement for a well-known credit card, it makes me say that lowering the canoes from the boat into the Antarctic waters is priceless. What comes next is an unforgettable paddle in the middle of the icebergs, in front of colonies of penguins that every now and then dive and re-emerge one after the other near the kayaks and among the leopard seals that come to snoop. Back on the Ice Bird, we take stock of the situation anchored near Damoy Point. We download the weather update with the satellite connection.

For the next three days, the forecasts are good, then three disturbances should arrive, which would seem to converge in the Straits of Drake. We could stop in Antarctica for another 2-3 days, but this would mean either facing the Drake crossing in the worst imaginable conditions or the risk of having to wait for other days for the return of a favorable window and losing the return flight from Ushuaia. We therefore decide to leave, in order to have the most critical part of navigation behind us when bad weather arrives. We remove the anchors and skirt the southwest side of Anvers Island, along the Bismark Strait, between Biscoe Bay, where the gigantic Marr Ice Piedmont glacier and the Wauwermans Islands arrive. Behind us emerge Cape Errera and Dayne Peak to the north and the towers of Cape Renard to the south. Our return to the Strait of Drake has begun. “

Finally, on January 28, the last stage: «The crossing of the Drake strait is more tormented than in the first leg. We reserve a lot of jolts and, frankly, we do the countdown to end it. We manage to overcome Cape Horn before the arrival of the announced disturbance. Pending an improvement in the sea conditions, we anchor in Puerto Williams and spend a couple of days relaxing and trekking. On the 27th afternoon it is the turn of an unforgettable ride in the Patagonian infinity. On the 28th morning we embark for Ushuaia ».

How to protect cultural heritage from extreme weather events?