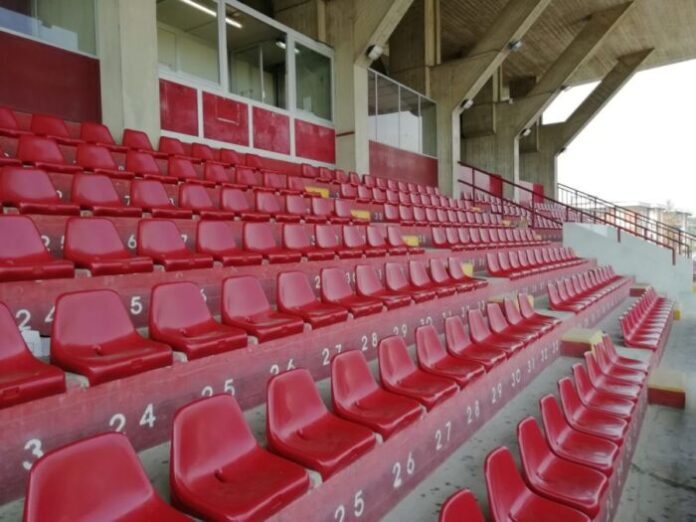 The about 3000 seats in the Pontedera stadium, where the local team plays, are today a true example of a circular economy and environmental sustainability. The mayor Matteo Franconi, in fact, presented the new terraces of the Mannucci stadium, the first facility in the world equipped with seats in recycled plastic.

“The city of Pontedera claims with satisfaction and pride – explains the mayor – the choice to equip its stadium with the first seats in the world made with mixed plastics of differentiated Tuscan collections, selected by Revet and recycled by Revet Recycling. It is a concrete application of the truly zero-km circular economy in which the collected waste, the citizens who conferred it, and the industrial plants that have further selected and then recycled them, are entirely of our territory: the Mannucci stadium uses them today as re-products. In the past few days we have also completed the restructuring of the lighting system of the LED stadium: an investment that modernizes our stadium and is well-founded in policies related to the “green transition” and the “green economy”.

What makes the project even more virtuous is the fact that the plastic used to make the new seats is derived from the packaging of Tuscan differentiated collections, which have been selected and recycled in the Revet plant, which is based in Pontedera, a few kilometers from the stadium Mannucci. It is therefore in a circular economy perspective that the approximately 3000 seats in the stadium have been replaced by seats made by recycling the Tuscan plasmix.

“The inauguration of the stadium crowns a long work carried out by Revet and its Research and Development office – explained the president of Revet, Livio Giannotti – which certifies the very high quality achieved by our granule. We are now working to reduce costs per unit of product, in order to make the final product competitive (not only environmentally, but also economically), with that made from 100% virgin material, which also exploits the economies of scale implemented so far in Worldwide”.

The Pontedese initiative was previewed in Brussels last May: this year’s European Green Week was in fact dedicated to projects for the ecological conversion of the football world and in this context Revet had been called upon to tell its experience .

“Transforming waste into new, useful objects and furnishings and contributing to spreading sustainable environmental protection practices in the world of football: a concrete example of a ‘made in Tuscany’ circular economy that gives us a world record: Pontedera is the first stadium with seats made in recycled plastic – says Antonello Ciotti, President of the Corepla Consortium – Innovation and the search for new applications are a distinctive trait of the Corepla system which, once again, proves to be at the forefront of environmental sustainability ”.

Revet, in collaboration with the Bologna-based company Omsi represented by managing director Marco Bongiovanni, leader in the seating molding for sports facilities, started from the virgin material that is currently used in the sector, to arrive at a material compatible with its recycled granule in so as to form a mixture which had the same characteristics as the starting material and which guaranteed compliance with the European V2 standards adopted by Fifa.

The project makes it possible to reduce the withdrawal of raw materials from the environment from 30% to 40%, minimizing the environmental impact of the oil industry (emissions deriving from the extraction, processing and transport of the same).

How to protect your hair in summer while respecting the environment

Synergy between adaptation and mitigation: a solution against climate change