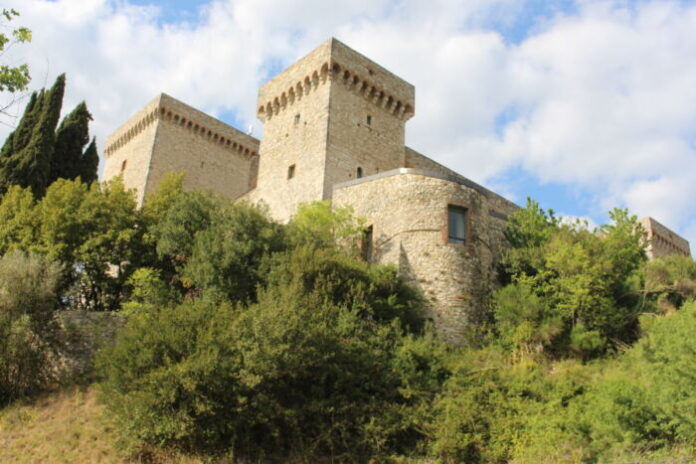 If apparently the path seems to be able to inspire wayfarers driven by a religious need, in reality the experience is suitable for all those who love nature and immersion in the landscapes of history and our culture.

The 101 km long route is characterized by 6 stages that coincide with the places that gave birth to the five Protomartyrs. Their importance is linked to the fact that they were the first of the Franciscan Order to die for their faith; in fact they had been sent by Francis of Assisi to Spain to carry out the evangelization of the territory, then in the hands of the Saracens. Taken prisoners, they were brought to Morocco, where they were killed in 1220 because they did not agree to stop preaching.

The first stop goes from Terni to Stroncone, a wonderful medieval village with narrow and winding streets, with stairways and arches that still preserve the flavor of history and the past. Before arriving in Stroncone, in a continuous ups and downs on the Terni hills, the abbey of San Benedetto in Fundis is intercepted. Dating back to the 9th-10th century, the abbey had to maintain close relationships with nearby monasteries and castles, despite its position in isolation between chestnut and olive groves.

Today the church, in a complete state of neglect and without a roof, still shows the basilica plan with three naves with opposing apses and the raised presbytery, where it is possible to see the ruin of the chair. Noteworthy is also the monastery of San Simeone, recently restored, after having been in ruins for a long time. The structure, located at the foot of Mount Rotondo, is located between the Terni valley in the front and steep cliffs in the rear and preserves wonderful frescoes inside.

In the stage from Stroncone to Calvi dell’Umbria, the traveler will meet the Speco di San Francesco, one of the most important sanctuaries of Franciscanism, near Narni. The speco is a 60 m long rift that descends almost vertically into the valley below; San Francesco arrived here in 1213, when the place was known as the Hermitage of Sant ‘Urbano.

In the sanctuary there are numerous frescoes and behind the apse there is the ancient well from which, according to tradition, the water was drawn which was changed into wine by San Francesco. The historic center of Calvi dell’Umbria also deserves attention, with its medieval alleys and the remains of the walls and towers; moreover, the walls of the houses were embellished with murals related to the Nativity, made over time by Italian and foreign painters. In the church of Sant’Antonio there is a monumental polychrome terracotta nativity scene made in 1546.

The route between Calvi dell’Umbria and Narni reserves remarkable surprises: from the medieval fortifications and the castle of Otricoli to the imposing Albornoziana fortress of Narni up to the numerous churches scattered along the road. Narni’s beauty is truly priceless: only those who have seen it can get an idea. The Palazzo dei Priori, among the most beautiful monuments of civic architecture, the splendor of the cathedral of San Giovenale, the hidden history of the underground Narni and many other churches, all particularly interesting for architecture and pictorial-decorative heritage, make Narni an absolutely place to know.

In the vicinity of Narni Scalo you can see, completely immersed in nature, what remains of the bridge of Augustus; moving your gaze towards the mountain of Santa Croce, as if suspended on the steep slopes, the abbey of San Cassiano appears majestic. The next stop is San Gemini, with the beautiful abbey of San Niccolò, the Palazzo del Capitano del Popolo and many other historic buildings; between Terni and San Gemini is the archaeological park of Carsulae, an ancient Roman municipality. Thanks to the excavations carried out, a large part of the Forum area is visible today, with the remains of the basilica and two twin temples, the Theater, the Amphitheater and the arch of San Damiano. The construction of the nearby medieval church of San Damiano, dating back to the 11th century, has seen a massive reuse of building material from the Roman age.

Passing through the numerous noble palaces of Cesi, still equipped with the medieval defensive walls, you return to Terni, with its basilica of San Valentino, the cathedral and numerous churches; in the surroundings you can visit the Marmore waterfall and the Piediluco lake, located between the heights covered with holm oaks, on whose banks the characteristic fishing village with colorful houses extends.

Between spirituality and nature, a path that amazes at every step.

What is it with Italians and tap water?