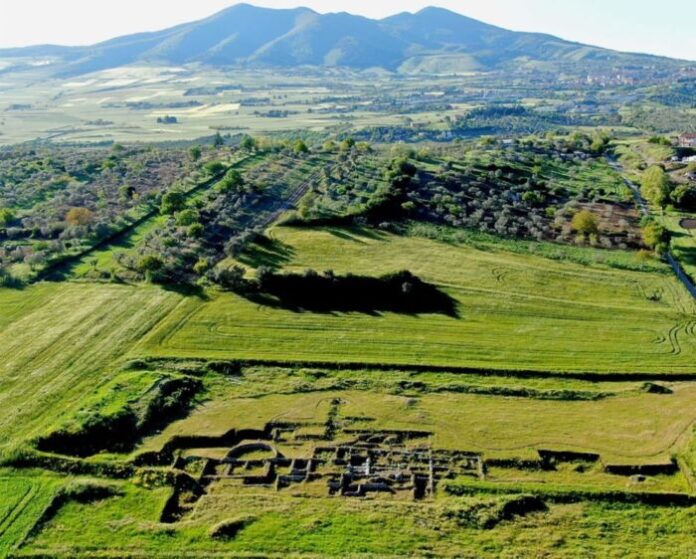 A small jewel hides between the green countryside and the hills of Basilicata. On the slopes of Monte Vulture, where the wide expanses of the Vitalba Valley begin, there is a Roman villa, partially brought to light by a series of excavation campaigns, which began in 2004 and stopped in 2012.

It is located between the municipalities of Rionero and Atella, in a particularly happy area, characterized by a landscape particularly conducive to human settlement and agricultural activity, in addition to the abundant presence of mineral waters. This suggested that it was not unlikely that there would be an additional Roman villa in the area, which in turn could be in visual relationship with multiple similar settlements scattered around.

Since spring 2019, a group of young people from Vulture has decided to set up a civic committee: their goal is to raise awareness among people so that a maintenance and enhancement campaign can be launched and, perhaps, a resumption of excavations can also be envisaged; in fact, the archaeological area is certainly much larger (80mt by 60mt), as demonstrated by a series of remote sensing.

The history of the villa could reserve many surprises, as it presents many phases of occupation and can tell many centuries of the past of this territory; considerable developments could emerge also for the late antique period and, even, regarding the spread of Christianity.

A first phase refers to the second century BC, an era in which a complex of baths was built, the dating of which was possible thanks to monetary discoveries, among which there is a silver denarius datable between 145 and 150 BC. C. The complex is made up of a calidarium, with cocciopesto flooring decorated with a polychrome mosaic (partially found), and a tepidarium with associated furnace. A short distance away there was a fountain, made impermeable with cocciopesto and fed by lead fistulae; the walls of the room were decorated with polychrome painted plaster, of which numerous fragments remain. The remains of black-painted and gray-paste ceramics and of the lanterns suggest that the first phase lasted until the first century A.D.

In the second phase, between the second and third centuries A. D., the baths were enlarged, with the addition, in the southern part, of an additional complex of bathrooms with calidarium and tepidarium. The discovery of numerous ridges needles and fragments of glass vases has pushed to hypothesize a female frequentation of the environments.

After leaving the complex of baths, a series of structures was subsequently built; particularly important is a large apsidal building, perhaps a Christian basilica, divided into three naves. The excavation has so far highlighted only the part connected to the apse and it is therefore premature to draw definitive conclusions. The previous structures have been reused and incorporated into the new building. The large basin of the fountain was used as a cistern and kept in use below the floor level of the apsidal building.

Next to the tank, always below the level of flooring, an inhumation tomb was discovered, with a cappuccina cover, the outfit of which consisted of a single vague of blue glass necklace decorated with white dice eyes.

The oven of thermal complex was adapted, at this stage, as part of a drainage channel joined to a structure equipped with two channels which, associated with the presence of millstones, testify to the existence of a water mill for milling wheat. The entire complex of buildings in this phase was probably destroyed by fire, as the discovery of a thick layer of burnt and collapses would suggest. The ceramic fragments and numismatic finds are datable between the 4th and 5th centuries A.D.

Subsequently other structures were built relating to a small quadrangular environment and another building, which partially reuses some previous wall remains. A small necropolis with 8 Capuchin tombs dating from the 5th and 7th centuries A.D. should date back to the same period as the latter. The definitive abandonment seems to have occurred in the seventh century A.D.

What can we do to help this little treasure? We can vote Torre degli Embrici in the tenth census of the Places of the Heart FAI because, through the minimum threshold of 2000 votes achieved, it is possible to present a project for the recovery, maintenance or enhancement of the area financed by the FAI (click here). We can also make this heritage known by talking to friends, enthusiasts and all those who care about the fantastic cultural wealth of our territory.

Offshore wind: from the North to Italy here are the European parks