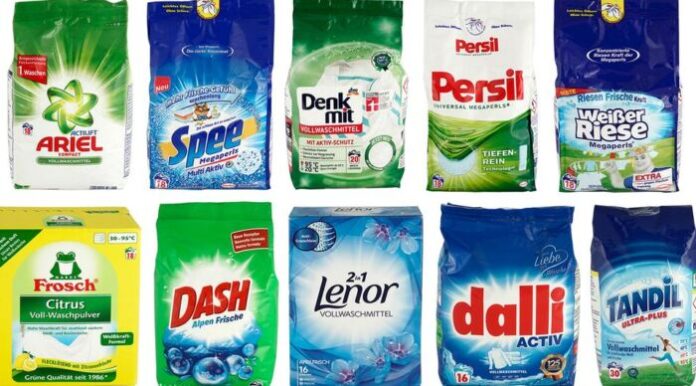 Almost every family uses laundry detergent to clean and sanitize linen but detergents can be very harmful to the environment. The German magazine Öko-Test, in one of its latest analyzes, tested 26 powder detergents for laundry, sold in supermarkets and discount stores. The objective was to verify the washing performance, in terms of stain removal, and their environmental impact.

From the results of the test, only 15 percent of detergents achieved a good score, while most products reached only sufficiency, including well-known brands and low-cost products such as Aldi’s and Lidl’s powder detergent.

Washing performance is often convincing, but the impact on the environment of many detergents that present polluting ingredients such as synthetic polymers and fragrances precipitate the score. The plastic compounds used, in fact, are soluble in water but poorly degradable, so that the purification plants are unable to filter them and end up directly in the irrigation systems of the fields and, subsequently, in the sea.

According to several manufacturers, there is currently no alternative to synthetic polymers in detergents for intensive use. These have, depending on the polymer, different functions but generally they are used in the composition of the detergent because they reduce the foam and ensure that the dirt is better eliminated during washing. However, 4 of the 26 detergents analyzed in the test do not contain controversial plastic compounds.

Other polluting ingredients are the optical brighteners contained in 22 detergents. These should make the laundry white but they are harmful to the environment as they are difficult to eliminate. Furthermore, if they pass from fibers to the skin, they can cause allergic reactions in combination with sunlight.

Even the fragrances used to perfume the laundry have proved to be harmful to the environment. Above all, to obtain a negative result was the Lilial fragrance, which is suspected to affect reproduction. Many fragrances are not biodegradable and some have even proved toxic to aquatic organisms. A real problem if you consider that producers and consumers consider it essential that the laundry smells good.

According to the research conducted by Öko-Test, the best powder detergent is Sonett, which has no fragrance, optical brightener or plastic compound. Followed by Ecover Universal Waschpulver, Shetlan Vollwaschmittel Super Compact (sold by the Penny supermarket), and Tandil Ultra-Plus (sold by Aldi Süd). The worst, however, is Ariel, which contains synthetic polymers and optical whitener, has no complete label and the washing performance is medium.

The German magazine recommends buying ecological detergents, without synthetic polymers. The problem is that the consumer can hardly understand if these substances are contained or not in a product, since on the label they hide behind complicated chemical names. The other advice is to use detergent dispensers that allow you to balance the use of the products based on the quantity of laundry and the hardness of the water.

Climate change, 6 months of summer could be the norm by 2100