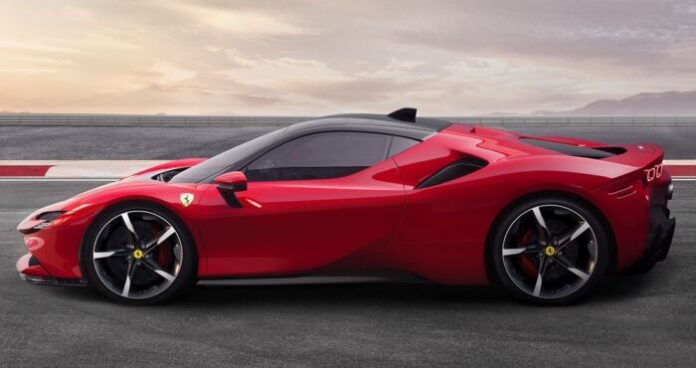 Ferrari introduces a new chapter in its history with the introduction of its first series production PHEV (Plug-in Hybrid Electric Vehicle), the SF90 Stradale. The new model is extreme on every level and represents a true paradigm shift, because it delivers unprecedented performance for a production car. Figures such as 1,000 cv, and a weight-to-power ratio of 1.57 kg/cv, and 390 kg of downforce at 250 km/h not only put the SF90 Stradale at the top of its segment, but also mean that a V8 is the top-of-the-range model for the first time in the marque’s history.

The car’s name encapsulates the true significance of all that has been achieved in terms of performance. The reference to the 90th anniversary of the foundation of Scuderia Ferrari underscores the strong link that has always existed between Ferrari’s track and road cars.

The SF90 Stradale is the first ever Ferrari to feature PHEV (Plug-in Hybrid Electric Vehicle) architecture which sees the internal combustion engine integrated with three electric motors, two of which are independent and located on the front axle, with the third at the rear between the engine and the gearbox.

The internal combustion engine and the electric motors work in synergy to unleash an incredible 1,000 cv which means the SF90 Stradale sets a whole new benchmark in terms of its performance and innovative content not just with regard to the Ferrari range, but also its competitors.

Thanks to its 780-cv power output, the turbo V8 featured in the SF90 Stradale raises the bar for the performance limits achievable by this type of architecture.

The SF90 Stradale is also the first Ferrari sports car to be equipped with 4WD, a step necessary to allow the incredible power unleashed by the hybrid powertrain to be fully exploited, ensuring the car has become the new benchmark for standing starts: 0-100km/h in 2.5 sec and 0-200km/h in just 6.7 seconds.

Ferrari’s engineers were able to further broaden the spectrum of dynamic controls by introducing the full-electric front axle, known as the RAC-e (electronic cornering set-up regulator). As well as exclusively providing propulsion in electric drive, the two front motors independently control the torque delivered to the two wheels, extending the concept of Torque Vectoring. Fully integrated into the car’s vehicle dynamics controls, the RAC-e governs the distribution of torque, making driving on the limit much simpler and easier.

The development of a hybrid car of this kind demanded the development of a series of innovative aerodynamic solutions. The significant boost in the power unit’s performance brought with it an increase in the amount of heat energy to be dissipated and required the development team to carry out an in-depth review of the aerodynamic flows on the radiating masses. It also demanded new solutions to increase downforce efficiently and guarantee maximum stability at all speeds and in all driving conditions.

Particularly noteworthy is the innovative shut-off Gurney, a patented active system located at the rear of the car which regulates the air flow over the upper body, reducing drag at high speeds with low lateral dynamics loads and increasing downforce in corners, under braking and during changes of direction.

The new car is epoch-changing from a stylistic perspective as it completely rewrites the mid-rear-engined sports berlinetta proportions introduced on the 360 Modena twenty years ago, instead taking its inspiration from Ferrari’s recent supercars. A good example is the cockpit, which has a smaller frontal section and is placed closer to the front of the car to reduce drag. This was also achieved without impacting on-board comfort.

Thanks to an additional steering wheel-mounted selector, dubbed the eManettino (analogous to the Manettino which is used to set the electronic vehicle dynamics modes), the driver can choose from four different power unit management modes:

eDrive: the internal combustion engine remains off and traction is entrusted entirely to the electric front axle. Starting with a fully charged battery, the car can cover up to 25 km in this mode. This mode is ideal for city centre driving or any other situation in which the driver wishes to eliminate the sound of the Ferrari V8.

Hybrid: this is the default setting when the car is turned on, in which the power flows are managed to optimise the overall efficiency of the system. The control logic autonomously decides whether to keep the internal combustion engine running or turn it off. If it is on, the internal combustion engine can run at maximum power thus guaranteeing powerful performance whenever the driver requires.

Performance: unlike ‘Hybrid’, this mode keeps the ICE running because the priority is more on charging the battery than on efficiency. This guarantees that power is instantly and fully available when required. This mode is best suited to situations in which driving pleasure and fun behind the wheel are the main focus.

Qualify: this mode allows the system to achieve maximum power output by allowing the electric motors to work at their maximum potential (162kW). The control logic prioritises performance over battery charging.

A brilliant encapsulation of the most advanced technologies developed in Maranello, the SF90 Stradale is also the perfect demonstration of how Ferrari immediately transitions the knowledge and skills it acquires in competition to its production cars.

Xenobot, the first living robot that collects microplastics in the ocean