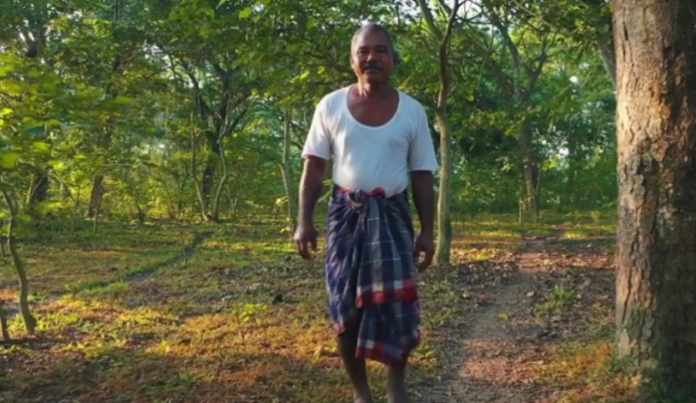 Big hands hardened by fatigue and the satisfied smile of those who know they have done something important for the environment. His name is Jadav Payeng, an Indian farmer who with the help of his hands has planted a forest that now shelters many animal species and has become a condensate of biodiversity.

Jadav is 60 years old, lives in northern India and has a modest home where he lives with his family of five. His story, told in a video published on Youtube by Nas Dailye, is incredible because it shows how much the commitment of a single person is enough to make the desert bloom again. Imagine what we can do by working together!

The story begins about forty years ago when the Indian farmer realized that everything around him was changing: the trees were dying, the animals were running away from the river and the land became increasingly desolate. In a word: deforestation.

Instead of sitting with his hands, Jadav Payeng did something very simple, he started planting trees. Every day he cut branches from his trees and walked to his destination; to reach it he had to cross the river with a small boat and, having arrived on the other bank, he walked for two more hours to reach a desolate piece of land where nothing grew and plant a tree.

The farmer did this every day for three months a year, every year, for forty years until the trees became a forest. A wonderful green forest of about 550 hectares, larger than Central Park in New York.

The trees, which have now become adults, produce seeds which, spreading on the ground, create new life. After many years, animals also began to populate the forest. There are elephants, tigers, rhinos and the flora grows prosperous so much that Jadav can now cultivate that land and make a living.

One day the farmer’s story was brought to public attention by the local media and Jadav Payeng became a kind of star. People started calling him “Forestman of India”, or the man from the Indian forest. The president of the nation awarded him an award and was sent as speaker to numerous conferences, becoming a source of inspiration for millions of people.

Forty years after the first time, Jadav Payeng still plants trees regularly and has no intention of stopping even if he now has another goal: to write a book telling his experience and explaining the importance of nature and trees even to younger generations.

Summer 2020: the most beautiful itineraries in Italy to cover by bicycle