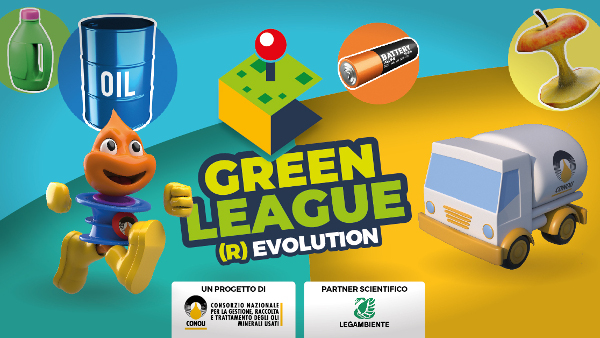 Saving the environment by playing: this is the mission of the new Green League app created by CONOU, the National Consortium of Used Oils with the scientific advice of Legambiente. Green League, available free for download on mobile devices from the Google Play and Apple Store platforms, is renewed by offering maximum usability of the player’s experience, accessibility, edutainment purposes and offering three games (Snuck, Garble and Oil Buster Reloaded) that recall deliberately the arcade dimension that characterized the golden age of arcade gaming.

The app, created in collaboration with the digital innovation company Mashfrog, presents itself with a smart, young and captivating color graphic, designed to guarantee simple and intuitive functionality, satisfying the need to have fun but providing tools to learn the processes. virtuosos of the circular economy.

“Green League is an app designed with a twofold objective: on the one hand, it wants to raise awareness among a large audience ranging from elementary school students to teenagers, from millennials to young adults who love gaming. On the other hand, it wants to encourage the adoption of virtuous behaviors to promote environmental protection: for this reason, it uses the double soul of the Green League project that combines educational content with playful presence “said Paolo Tomasi, President of CONOU.

Before starting the game, the games offer training pills on issues of environmental sustainability, energy saving, the differentiated management of urban and hazardous waste as well as information on CONOU’s activity and on the circular economy. At the end of the game session, the user is invited to answer some questions on what he previously learned, having the opportunity to increase his score and climb the world ranking: a mode aimed at promoting the creation of a real community of players who accept the challenge of helping the environment and spreading the message in turn.

Oil Buster Reloaded: the flagship of Green League, it presents a new game concept divided into 14 levels and layouts with a focus on the quality of the used oil collection. The protagonist of the game is Joil, the historic mascot of CONOU’s environmental education projects. The character, reproduced in 3D version, is committed to releasing the drops of used oil by hitting groups of spheres and subsequently to collect it, however avoiding to include drops of water or other polluting substances to preserve the quality of the collected waste.

Snuck: it is the green evolution of Snake, the unforgettable game that dominated the 90s, which takes on a new 3D graphics to make the experience even more realistic. The player, driving a CONOU collection vehicle, must collect as many barrels of used oil as possible thus contributing to the circular economy of the supply chain.

Garble: it is built on the logic of the classic tetris and centered on the recovery of everyday materials in a perspective of evolved circular economy. The aim is to combine three or more icons of the same recyclable object (used oil, paper, plastic, aluminum, organic waste and batteries) to trigger series of combos, paying particular attention to special waste in order to obtain additional points and increase time of game available.