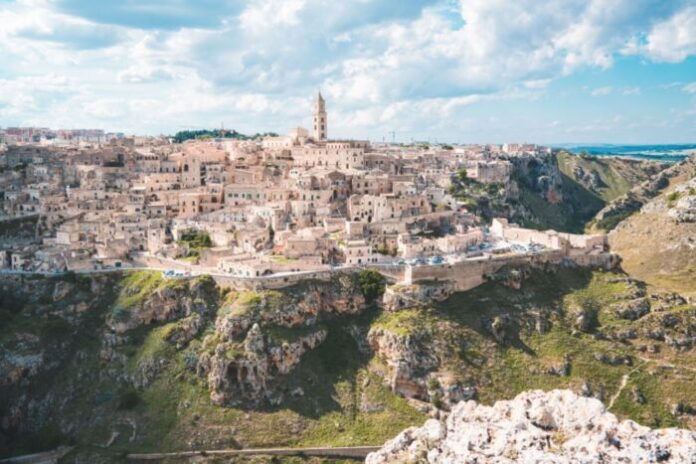 Designed for tourism through slow traffic and towards internal areas, normally not considered by traditional circuits, the Materano Way is a way to get in touch with all the resources of the territory: natural, historical-archaeological, cultural, food and wine resources and also human, considering that it is fully in tune with the people and local communities.

The path, to be done strictly on foot, leads the tourist to experience the places and live an unforgettable activity. According to what David Le Breton observed in his The world on foot. March praise:

“Walking, in the context of contemporary reality, would seem to express a form of nostalgia, or of resistance. Walkers are singular people, who accept for a few hours or a few days to get out of the car to physically venture into the nakedness of the world. The act of walking represents the triumph of the body, with different shades according to the degree of freedom of the person. It favors the elaboration of an elementary philosophy of existence based on a series of small things, induces for a moment the wayfarer to question himself, his relationship with nature, with others, to meditate on an unexpected range of issues. “

The Way is therefore a spiritual itinerary in one’s interiority and in search of one’s identity as a living in the world and in the surrounding nature; it is a journey where the only real goal is the journey and the slow rhythm of the steps and thoughts.

The Materan Way, recognized in the Atlas of Paths of the Ministry of Cultural Heritage, consists of five different itineraries, all dedicated to the pre-Roman populations of Southern Italy: Via Peuceta, Via Ellenica, Via Jonica, via Dauna and via Lucana. The last itinerary is the Via Sveva, dedicated to the extraordinary figure of Federico II, which starts from the castle of Trani and then from Andria, in whose Cathedral the remains of two of Federico’s wives are preserved, leads to Castel del Monte and, through the Alta Murgia National Park, in the city of stones.

The Via Peuceta is a path that starts from the Basilica of San Nicola di Bari, a symbol of the pilgrimage in Puglia, and crosses the ancient territory of Peucezia: from the olive forest of the coastal plain to the steppe expanses of the Murgian plateau and the woods of conifers and oaks, up to the blades and ravines of the rock scenery where Gravina in Puglia and Matera rise. Along the 170 km you can discover the rich Apulian and Lucanian cultural heritage, consisting not only of cathedrals, medieval villages, rock churches, Greek and Roman remains, but also of farms, trulli, dry stone walls and the magical gastronomy of the peasant tradition.

Through the Via Appia-Traiana, starting from Brindisi, the fascinating itinerary of the Via Hellenica takes shape; on the way you can meet the two Unesco sites of the Sassi of Matera and the Trulli of Alberobello, the wonderful villages of the Itria Valley and the extraordinary open-air museum of the Gravine Park.

The Via Jonica is a 215 km path along the Ionian coast from Taranto, the city of the two seas, to Leuca, the finis terrae of Italy. The walk takes place in a continuous circle of environments made up of Mediterranean scrub, long beaches with their sixteenth-century watchtowers and numerous unspoiled natural oases.

The Via Dauna is a journey between Molise and Puglia, along the ancient paths of transhumance and pilgrimages. The path passes through ancient villages perched on the rocky spurs of the Dauni Mountains, interspersed with luxuriant oak and beech forests, valleys and breathtaking landscapes. After Melfi, the Norman capital, and Venosa, statio of the Via Appia and seat of the majestic Church of the Incompiuta, the path rejoins the Via Sveva to get to Matera.

Starting from Matera, the path of via Lucana moves through the enchanting landscapes of the Apennines and the Lucanian Dolomites, of the Cilento National Park up to the Tyrrhenian Sea where the temple of Hera stands in Paestum, passing through villages and wonderful natural places.

A tourism to be enjoyed step by step, to rebuild the unchanged and eternal bond created over the centuries between man and nature and to feel truly at home.

Earth-friendly diet: how to eat to fight climate change